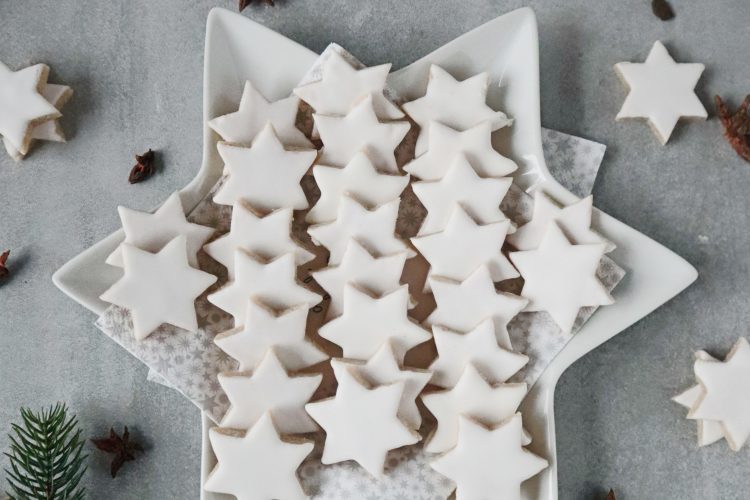 Which cookies can’t be missed at Christmas time? There are so many great cookies that it’s usually hard to decide. For me, most of the recipes are from my grandma. Since these already accompany me for many years through the Christmas season, there are often no others.

The cinnamon stars are different, I integrated them into my cookie routine at some point. First I cut out the stars and then spread the egg white icing on the star. However, I found that super tedious. So the recipe had to be tweaked. For several years, I now toll out the dough, spread the glaze directly on it and cut out the stars afterwards. So you have a nice even coating and sharp cut out edges on the stars. It‘s also faster for me to do it that way. The remaining dough with glaze can always be kneaded together and rolled out again. Just keep adding a little powdered sugar or almond meal to it. Otherwise it‘s very sticky.

It is also helpful to use a rolling pin with spacer rings. Thus, you always roll out the dough evenly. I also use a cookie cutter that you can press apart after cutting. This allows you to carefully transfer the cinnamon stars to the baking tray without damaging the glaze or the dough.

I’ll use the following tools: 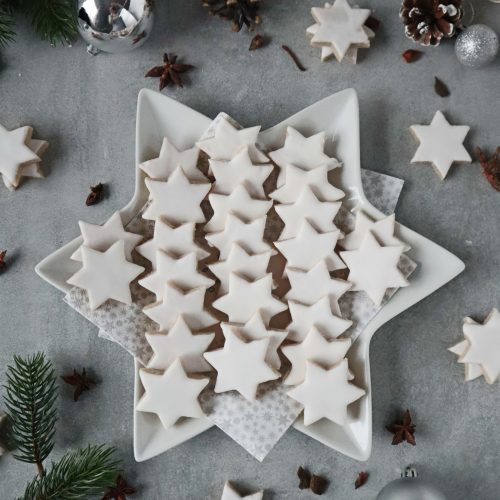 For cinnamon lovers, cinnamon stars are a must during the Christmas season. In my version, the glaze is applied directly to the dough and then cut out.
5 from 2 votes
Rezept drucken Pin Recipe

Have you already baked the cinnamon stars? Let me know and link me on Instagram (@katharinas_cakes_) so I can see your post and share them in my story.

*These are affiliate links and I receive a commission for any sales made through this link.